Sholom U’Brocho!
Mazel Tov to Shalom Goldberg on the occasion of his engagement. Mazel Tov to Kutty Goldstein on the occasion of his engagement. May they use out the special period of Yokor Mikol yokor to its’ utmost! Mazel Tov to Rabbi & Mrs. Peretz Schapiro on the birth of their daughter. May they bring her up lTOveCHuMAA”T mitoch harchovo, and to be a true chayolo! (If anyone is aware of any mazeltov’s that I omitted please let me know).
Thank you as always for the feedback, it is much appreciated.

Recently I learned of a practice that has, apparently become very prevalent amongst growing groups of Jewish people. I will not be insulted if you have a hard time believing me, I myself couldn’t figure out if this was some poor joke. But I’m not making this up. I verified this with the most reliable sources (and I don’t mean the Rambam, I’m talking about – lehavdil – Wikipedia), and there really is such a phenomenon amongst numerous congregations. So read on, as I quote to you from Wikipedia definition of . . a “Bark Mitzva”:
A Bark Mitzvah is a pseudo-traditional observance and celebration of a dog’s coming of age, as in the Jewish traditional Bar Mitzvah and Bat Mitzvah. The term has been in use since at least as early as 1997 . . The Bark Mitzvah is a celebration not necessarily held in conjunction with a specific age but can occur when the dog turns 13 months or 13 years of age. This is equivalent to about 91 dog years. During some Bark Mitzvahs, dogs wear a tallit, a ritual prayer shawl worn during Jewish religious services and ceremonies. 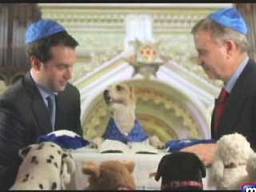 A male dog wears a specific yarmulke, a thin skullcap . . Although the idea of the Bark Mitzvah is frowned upon by some, the idea spread throughout the United States, and the celebrations have continued to occur. The ceremonies became increasingly popular on the East and West Coasts in the early 2000s. As a result, specialty pet stores and dog bakeries now offer special Bark Mitzvah party packages, party favors, and gifts. 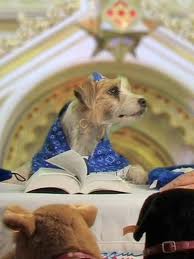